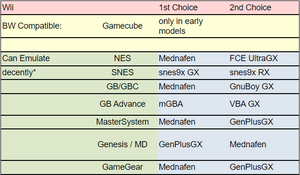 Overview of the main popular systems that can be emulated without major issues.

For software that emulates the Wii, see Wii emulators.

WiiMednafen has not been programmed to work in PAL systems and it will have black bars on top and bottom of the screen leading to a sort of widescreen stretch effect. Double-strike mode (240p) will not work properly on PAL systems even on a CRT and regardless of the cables used.

RA-SS
A fork of RetroArch that aims to provide a more compact and user friendly experience. It adds several quality of life improvements such as auto-resolution switching, better multiplayer support, debloated menus, per-game and per-core settings, Wii Message Board integration, and more.

There's frequent hiccups and graphical glitches in most N64 games on either emulators. Tinkering with settings might help in some cases. (Source)

This requires a bit of explaining.

When the Nintendo Wii was launched, it introduced native backward compatibility with the GameCube, allowing memory cards and GameCube controllers to be used with GameCube games. This is widely known and it allowed Dolphin to support the Wii early in its open-source era. However, this compatibility was lost when Nintendo released newer models called the Wii: Family Edition (although the ports were merely stripped from the casing; the circuit board still contains the areas where the connectors would go, see Wikipedia's section on it) and the Wii Mini (which also lacks an SD card slot as well.) Also on the Wii U, the GameCube ports don't exist at all, only being offered afterward as a USB peripheral in order to play Super Smash Bros. for Wii U.

However, homebrew developer FIX94 has developed an interpreter that allows all versions of the Wii (and the Wii U) that can run homebrew to read and run GameCube games, not only from a disc, but from SD cards and USB devices too. This comes with the added benefit that more controllers are supported past the normal GameCube ones, which makes it possible to play on consoles that don't have GCN controller ports.

Some notable features are the ability to use other controllers like the Classic Controller, Wiimote+Nunchuck, and some HID USB controllers, memory card emulation, playing TRIFORCE arcade games (after converted to an .iso), and recently Broadband Adapter emulation using the Wii's wireless communications.

PicoDrive
While it is only available as a libretro core and is behind Genesis Plus GX and WiiMednafen in terms of compatibility and accuracy, it is currently the only way to play 32X games on the Wii.

Slowdown may occur when on 3D sections of Genesis games or 32X games.

Anything bigger than 25MBs won't load because the Wii doesn't have enough memory. Some uncompatible roms can be modified in order to work. A good compatibility list is available on a Spanish website.

emGBA has around 13%-17% worse performance than regular mGBA on heavy GBA games. (Source)

THERE ARE NO EMULATORS FOR THIS PLATFORM.