ZSNES is a free and open-source Super Famicom (SNES) emulator written in x86 assembly. It was originally made in 1997 and was one of the most popular Super Nintendo emulators from late nineties to mid-2000s, but now is obsolete and has not been updated since 2007. Currently the only reason to use ZSNES is for the netplay.

The ZSNES developers focused on speed over accuracy, so a hefty amount of games have bugs (and some just crash outright). The current version (v1.51) created more problems than it fixed and many problems still remain: 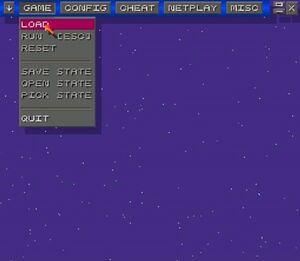 Despite being outclassed by many more accurate and secure emulators, some held on to Zsnes for its iconic user interface.

must press 8 to switch to the old graphics engine.

These are just a few problems, there are a few more listed here and here.

It is recommended to use Snes9x or higan instead.

Many ROM hacks and ROM hacking tools were made using ZSNES as a testing platform because of its popularity. However, because of the inaccuracies of the emulator, these tools and hacks are broken on other, more accurate emulators and real hardware.

In 2011, Near (then known as byuu) released bZSNES - a modification of his bsnes that includes the optional inaccuracies of ZSNES and a similar GUI - as an April Fool's Day joke. It however only has moderate compatibility with ROM hacks made specifically for ZSNES.[citation needed]

ZMZ is a program that utilizes libretro versions of Snes9x and 2002, 2005 and 2010 variants, as well as the bsnes cores, much like RetroArch. It uses the exact same interface that ZSNES uses and can record ZMV files.