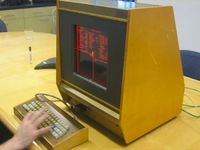 The PLATO (Programmed Logic for Automatic Teaching Operations) system was an early distributed computing network which was in use from the 1960s up until 2006. It was designed to deliver lessons to students in computer labs and at home. While PLATO was the first example of computerized, automated learning, it is much more famous for being the first computer system to include modern concepts such as forums, message boards, online testing, e-mail, chat rooms, picture languages, instant messaging, remote screen sharing, and multiplayer games. Although there were several makes and models of PLATO terminals, and some of the terminals could do processing user-side, the experience was largely the same across all PLATO terminals, as they all connected to the same mainframe. 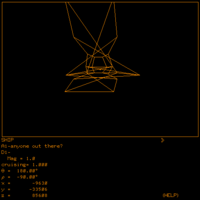 "Spasim", showcased the powerful graphical capabilities of the system.

Although the system was primarily used for education, research, and communication, a large assortment of games came to be developed for the system. Notable games include dnd which bears a striking resemblance to Rogue, written 6 years afterwards for UNIX systems, spasim which is eerily similar to David Braben's ELITE, written almost 10 years later, empire, a Star Trek strategy game, avatar, a (arguably the first) MUD, Moria (perhaps the first example of a first-person dungeon crawler) and many more.

Moria being played on PTERM.

Cyber1 is the modern reincarnation of the PLATO system. It runs the original NOS operating system via the desktop CYBER emulator mentioned above. It has over 16,000 of the original lessons from the PLATO system. The online aspect is also entirely present, and has roughly 30-50 members on at any time, most of whom are playing the various multiplayer games, but also might be chatting or viewing actual lessons. To connect to the Cyber1 system you need the PLATO Terminal Emulator (PTERM) and a sign-on. To receive a sign-on, simply go here. They request that you use actual information, as it is part of their licensing agreement with the companies that bought out CDC and PLATO, although naturally, you can just use a strong pseudonym. (A word of warning, their spam request filter is particularly sensitive, so if you do not fill out all sections completely, it is likely your request will not even go through.)