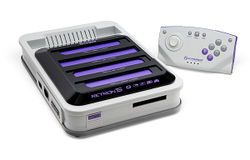 The Retron5 is an emulation box created by Hyperkin specifically to emulate older systems, primarily by using the original cartridges. While various official controllers can be used from the emulated consoles, the Retron5 is equipped with its own wireless controller. To play the games, the Retron5 utilizes RetroArch.

Hyperkin encountered controversy shortly after launching the Retron5 in 2014. The console was found to make use of:

To make matters worse, Hyperkin initially didn't release any of the source code, which is a requirement of all the licenses. While they later acknowledged this,[3] the RetroArch developers have said that not all of the source code was provided.[4] This has yet to be resolved.