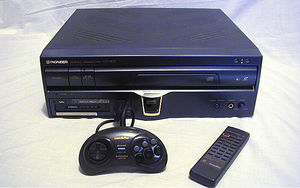 Currently, there are no emulators for LaserActive games.

The LaserActive Project wishes to document all LaserActive media. On their FAQ page, they have this to say about the possibility of creating a LaserActive emulator:

Emulation of the LaserActive, if attempted at all, would be an incredibly difficult task – due to the hybrid nature of the system’s hardware (utilizing Sega/NEC hardware in synchronization with the unique LD player hardware) and the analog-digital composite image (analog video background, digital in-game graphics generated by said Sega/NEC hardware)[1]