Work in progress guide. Please expand upon it. 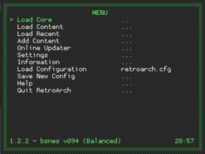 To launch a game, select the emulator core you'd like to use under Core, and select a ROM under Load Game.

First, add the PPA for ppa:libretro/stable or ppa:libretro/testing for stable builds and dev builds respectively (instructions here), then type the following into a terminal:

Replace <corename> with the name of the package the core is available in. You can see all of the cores available to you either in your package manager (e.g. Synaptic, Software Center) or by visiting Launchpad. To install all (or at least most) of the cores in one go, run

This section applies to most distros of Linux, but the paths referenced may be Ubuntu-specific.

Next you need to locate the directory in which the libretro cores are stored. They should have been saved in the directory /usr/lib/libretro. You can check this by entering the command

You should see a list of all the cores you downloaded. If the directory does not exist, you can find where the cores were saved with the find command:

find may return several directories. Use ls to check each one until you find the downloaded cores.

Once you've located the libretro cores, it's time to open retroarch.cfg using your editor of choice. Look for the option libretro_directory, which may be located near the bottom of the file. Insert the path to the libretro cores between the quotation marks on the right hand side. Assuming the cores are located in /usr/lib/libretro, the line in the configuration file should look like

You can also set the libretro path using the RGUI. In Retroarch, go to Settings -> Path Options -> Core Directory and navigate to the appropriate folder. If you set everything up correctly, you should see the cores when you select the Core option in the RGUI.

Now, change portage to pull from the RetroArch git repository:

Set USE flags that you want, it is not required to enable every single one (you only need at least one audio and video output device; defaults are suitable enough). It is recommended to add udev for joystick support and netplay for netplay support.

Build and install RetroArch from the git repository

No cores are added by default, you will need to emerge them.

Alternatively, you can set USE flags through /etc/portage/package.use libretro-meta package to choose what cores you wish; small all USE flags are on.

bsnes has USE flags for its balanced, performance and accuracy profiles:

The cores will be installed under /usr/lib/libretro/

You will have to compile from source. For Arch Linux, there are AUR packages that simplify this process, although it is not incredibly difficult otherwise. The most important part is making sure you have all the dependencies.

Dependencies: (refer to your distro's wiki or package manager for exact package names)

RetroArch has a robust CLI for those who prefer the command line, there are also many pages which should have been installed by default for retroarch, retroarch-joyconfig and others. If you use the CLI be sure to configure your retroarch.cfg file before first use. This config is well commented so each option can be fully understood. Use retroarch-joyconfig command for simplified input setup. RetroArch can auto-detect inputs, which is a great feature to simplify playing with multiple/different controllers (refer to man retroarch-joyconfig for details). The retroarch.cfg file should be located in /etc/retroarch.cfg, your home folder or the directory where RetroArch was installed depending on your distro and compilation setup.

Default keys for the keyboard are: x (confirm), z (back) and the arrow keys. If you're using an XInput (xbox 360) controller, your controller should already be set-up.

If you are going to play in a system that needs a BIOS (e.g. PS1), place the BIOS files in RetroArch's 'system' directory.

Mednafen is very picky about which BIOS to use. The ones that you might need are:

Mednafen requires you to load games through CUE sheets. Ensure that the CUE sheet is properly set up in order for the game to run. See the Cue sheet (.cue) for more.

The following file need to be placed in the System folder to use the Rice plugin:

Glide64mk2.ini is no longer needed in the current version of mupen64plus-libretro, as it is baked into the Glide64 now.

Using recent builds of the bsnes libretro cores, you can load Game Boy games in a fully emulated Super Game Boy. As this feature is not currently implemented in RGUI, you must do so using a command line. First you need to set the core to a bsnes core (any of the 3 profiles will work) using RGUI or editing your config file, then start RetroArch with the following command to load GB games in SGB mode using bsnes:

Put the actual paths to the ROMs in double quotes. For example:

You will need sgb.boot.rom in your System folder, this can be found on the Emulator Files page in the SNES file pack if you do not have it.

You can also use the RetroArch-Phoenix launcher to launcher to load them, but YMMV since it is not being updated anymore.

PS1 games often used a set of default remappings if they didn't support it directly. Some games used both analogs as the D-pad, RetroArch doesn't support that though. Dual analogs only work in games that fully supported them, such as Ape Escape. To use dual analog for such games, start a game with mednafen/beetle_psx then go to Input Options, and change Device Type to DualShock. Also make sure you're using a recent version of RetroArch and the mednafen/beetle_psx core.

Some games like Metal Gear Solid require the disk tray to be opened before changing disks. To do this, change 'Disk Index' to 'No Disk' first.

It is possible to use the custom palettes created with the standalone Qt GUI version of Gambatte.

First set the "gb_colorization" core option as "custom". Then create a "palettes" subdirectory in the system directory and copy the custom palettes there.

The custom palettes will be searched in this order:

You can download the set of standard SGB and GBC palettes here (look for "goomba2gambatte palette converter in python").

RetroArch supports loading audio DSP plugins to add effects such as reverb to the audio output. This has been in RetroArch for a long time, but was recently reworked to be easier to use and more accessible from RGUI, and are available in the main RetroArch repository now. Now you can load DSP filters using RGUI under Settings\Audio Options\DSP Filter, where you can load a DSP preset with .dsp extension, which is a text file similar to a shader preset that lets you chain DSP filters and specify their options. The DSP filters themselves are dynamic libraries that are loaded according to the .dsp file. Each DSP filter has a standalone preset that documents the default options, and there are some example presets that combine more than one filter.

Note that some of these filters may reduce volume a bit, so you may want to boost RA's volume level to compensate. If you want to remove the filter, press Start when the DSP Filter option is highlighted.

The filters and their presets can be found here, which the DSP filters can be built for your platform with the makefile. These files should be included in nightly builds from the buildbot.

Classic emulator filters like SuperEagle or Blargg's NTSC have been available as bSNES filter plugins in the past, which is no longer supported in bSNES/higan but was still available in RetroArch. However, this filter format was recently replaced with the SoftFilter spec, which has been upgraded to support more platforms, multi-threading and SIMD usage. The filters are dynamic libraries which are loaded in RGUI under Settings\Video\Soft Filter, which will apply the filter before any shaders are applied.

The filters are found here, which can be built for your platform with the makefile. These files should be included in nightly builds from the buildbot.

Note that these filters are WIP and may not work with all cores as they need to have codepaths for the pixel format the core uses (either 32bpp XRGB8888 or 16bpp RGB565). Blargg's NTSC is currently limited to 16bpp cores for example (bSNES is 32bpp so it won't work, but SNES9x is 16bpp so it works there). Cores that use Libretro GL for 3D like Mupen64plus can not use these filters.

An easy way to get RetroArch to output logs to file for easy copy/pasting:

It will load up to RGUI as if you just double clicked the executable, but it will redirect standard output and standard error to a text file called log.txt in your RetroArch folder. The command above will append to the log and not overwrite existing information, if you want it to overwrite, change ">>" into ">". This can be put into a .bat file to easily run it when desired.

Libretro-super is a series of scripts used to ease the compilation and installation of each and every libretro emulation core and RetroArch itself. Thus this is the simplest route to a fully functional installation. If you need or want to build each core individually then you can refer to the build-common.sh script for direction.

If you want to build cores individually with the script instead of all of them at once, you can do this

to call one core's build function directly instead of calling them all.

This tends to happen when you first start up RetroArch and not after loading a game. This is because without a core loaded, the menu is only throttled by Vsync when Limit Maximum Run Speed is disabled, while cores are able to throttle on audio as well. Fastforward disables both Vsync and audio sync, which allows the core to run unthrottled unless it is specifically limited by the Maximum Run Speed setting.

Command prompt running and closing itself upon running retroarch.exe

If this only happens on certain cores, then you should check to see if you have all the required BIOS and other files available in the "system" folder or in the folder where the game is located.

If it happens on all cores with a clean config file, then try changing video_driver setting from gl to d3d or sdl2, if you have a particularly ancient GPU.