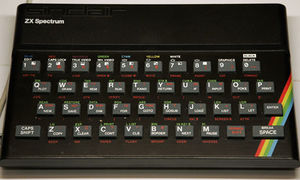 The ZX Spectrum (Pronounced ZED-ex) is an 8-bit home computing platform developed by Sinclair in 1982. It was one of the three major 8-bit home computer platforms that dominated the market in the United Kingdom during the 1980s, alongside the Commodore 64 and the Amstrad Colour Personal Computer. The "Spectrum" is in reference to its color display, an innovation from the previous model, the ZX81. The Spectrum was released as eight different models, ranging from the entry level model with 16 KiB RAM released in 1982 to the ZX Spectrum +3 with 128 KiB RAM and built in floppy disk drive in 1987; together they sold in excess of 5 million units worldwide, not accounting for the numerous clones. The device was highly significant in British culture, so much so that its creator, Clive Sinclair, was knighted for services to the British industry, in 1983. Spectrum game development continues to this day, with over 100 new releases since 2012.

An old list of emulators can be found here.