xemu is a free and open-source low-level Xbox emulator by Matt Borgerson continuing much of the work done on XQEMU. Focuses on stability, performance, and ease of use. 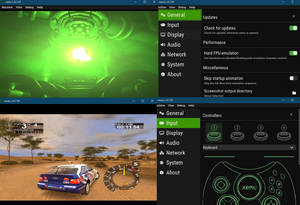 xemu is an active fork of the XQEMU project, which is based on the very popular and highly actively maintained QEMU full system emulator project. xemu is an low-level, full-system emulator which emulates the actual hardware of the Xbox. It is the best Xbox emulator around, and can play 5x more playable titles than Cxbx-Reloaded with better performance than XQEMU.

The announcements thread in the official Discord channel of this xemu emulator (see external links below) regularly posts updates on progress of user tests and compatibility levels.

In order to actually run xemu, you must have a copy of the stuff that a real Xbox needs when it turns on, check out the getting started section on the official wiki for instructions. The real MCPX and flash ROM are required, but one can still boot and play games using the dummy dashboard HDD image.

Unlike all other Xbox emulators (with the exception of XQEMU), xemu will only load games as disk images in the ISO format. Redump ISOs currently must be adjusted slightly by using the instructions in the Disc Images guide. Games as extracted folders in the "HDD Ready" format can be converted to ISOs using extract-xiso. It is also possible to install a custom dashboard such as UnleashX that supports installing and loading the games from the emulated hard drive.