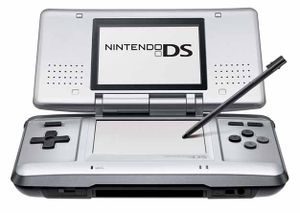 These features are not supported by the mainline DeSmuME project in particular due to timing inaccuracies and creative differences, and it's highly unlikely they will ever be included in the future. If you're interested in these features, follow other projects and refrain from contacting the developers about them as per their wishes in their "official stance" on Wi-Fi features in general.

Features like the solar sensor in Boktai DS (Lunar Knight) using the GBA Boktai cartridges in Slot-2 are not emulated yet on the other hand.

Nintendo released the DSi in 2009, doing away with Slot-2 (used by GBA cartridges and Guitar Hero games) but also adding new lighting effects, a camera, more RAM, and downloadable titles called DSiWare though those were capped to 16MB because they were installed to the very small internal NAND memory. DSiWare releases were also region locked, and the system language couldn't be changed. The Nintendo 3DS is also compatible with those games and offers a way to back them up to an SD card.

All three formats can be converted to *.nds format. Compared to regular DS games, DSi games had some additional header information that wasn't even correctly dumped in the earlier broken dumps. The 2017 set has updated many of those, though it's still severely lacking in DSiWare exclusives. DSiWare dumps exist in both NDS format, or CIA format (for the ones who want to boot it on their 3DS).

On the old DS or DS Lite models, as well as most Nintendo DS emulators, the first type will load in regular DS mode without any DSi enhancements, the second will show an error message, and the third will crash on boot-up due to missing encryption abilities and DSi hardware support.

On the DSi/3DS family of handhelds, the first two formats can be played on some select DSi-compatible flashcarts like the (discontinued and now expensive) CycloDS iEvolution flashcard (which won't work on a stock 3DS not with custom firmware to whitelist it). As for the third type, it's available for digital purchase at their respective stores (DSi Shop for DSi, eShop for the 3DS) and installed as apps to the limited TWL NAND. In the 3DS' case, they can also be installed as custom titles in .cia format (like all 3DS applications, but here it's also a container for an .nds rom in this case, and converting back and forth is possible).

No$GBA added support for DSi games of all three formats starting with version 2.8, although some games wont boot and others have graphical glitches. You'll need to enable "16MB DSi/retail" under the settings. Emulation is very iffy due to a so-so DS emulation foundation in NO$GBA, and the camera is just spoofed as a static image but just causes an emulator crash whenever used, meaning games that use it may boot but it won't be very playable.

DSi used an encryption system for the game dumps that went on to be enhanced and used for the 3DS. This encryption is checked at start-up, hence why DS emulators don't even manage to boot DSiWare dumps. It's very unlikely DSi-mode emulation is ever going to be implemented in Desmume in particular due to various creative differences unique to that project.

It's also advised (but still completely optional) to use a NAND dump as well to increase compatibility (though adding games is more complex, and a soft-modding solution to dump it is still being worked on). Rename it to "DSi-1.mmc" (should be about 250MB). Change "Reset/Startup Entrypoint to "GBA/NDS BIOS" to now boot the emulator and games in DSi mode. Hex editing required to "install" new DSiWare titles, though loading retail games in DSi mode from the menu is still possible easily. This fixes lots of glitches and crashes related to languages and use of the internal DSi font.

Nintendo released their Nintendo DS in China under the name iQue DS along with a few localized games. There is one important difference, though. While the Chinese iQue DS ROMs are perfectly normal DS ROMs, they also have region locking implemented, preventing them from running on any DS system that's not the Chinese iQue DS model. (However, any 3DS from any region will run these Chinese iQue DS games, despite actual 3DS games being region-locked. Go figure.) No other DS games - not even Korean releases - do this.

If you try to emulate those ROMs with No$GBA, it just crashes. DeSmuME will at least boot, yet DeSmuME will always show the message that shows on real (non-iQue) DS hardware: a glowing message on a black background that says (in English) "Only for iQue DS" and just loops endlessly on that same screen. In the event you're desperate to emulate those releases, you'll want to change the ROM (with a hex editor) - specifically the byte at 0x1D must be changed from 80 to 00.

Certain games, such as American Girl titles (e.g. Julie Finds a Way and Kit Mystery Challenge) suffer from severe flickering issues which keep those games from being playable on most emulators; so far DraStic is the only emulator able to run the two games properly, and while Desmume r5043 had an initial fix that worked around the flickering issues, it was removed in later revisions as it broke compatibility with Pokemon SoulSilver among others; this has since been patched on r5531 once the true nature of the bug was better understood.