Dolphin is an open-source GameCube, Wii emulator that is also available as a libretro core for RetroArch.

* Linux support comes in the form of an official Ubuntu PPA. See pkgs.org for other distributions.

Dolphin is a GameCube, Wii emulator that supports many extra features not present on the original consoles, and additionally capable of basic Game Boy Advance by its own built-in version of mGBA with stripped-down GUI, for the sake of GameCube games that support connectivity features. Though early development was supported by a very active homebrew scene led by fail0verflow precursor Team Twiizers, proper emulation is still underway as of 2018 and improvements are still being made as Wii games continue to have issues.

Dolphin's official website, dolphin-emu.org, also runs a blog with monthly progress reports, tracking pull requests from contributors, and providing comprehensive and in-depth feature articles. Another site that has been confused for the real one, dolphin-emulator.com, has no connection to the project and only hosts builds going up to 4.0. 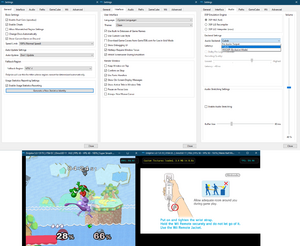 Some of Dolphin's settings and game screenshots. View picture to enlarge.

Instructional animation on how to use Swiss with Dolphin. Click to view.

Dolphin has support for widescreen output and can override the aspect ratio of the original game. However, this is a hack that rarely works without issues.

To get widescreen fully natively, try Swiss. This can even be run on a real GameCube/Wii if desired.

The Dolphin Team is working on an official VR implementation using OpenXR.[2][3]