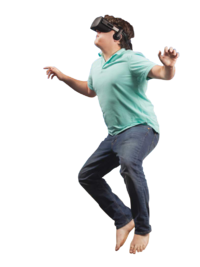 Virtual reality is still in its early days. All applications (such as emulators) that want to support a VR headset have to deal with different APIs, controls and sensors unique to each platform. This will hopefully get better now that OpenXR has been released. OpenXR is an open and royalty-free standard from Khronos (the organization behind open standards such as OpenGL and Vulkan) that will act as a middle man between VR/AR hardware of all sorts with the purpose to solve VR/AR fragmentation. This will hopefully make it possible to implent VR code once with the OpenXR API and have it compatible with all current and future VR headsets. If OpenXR succeeds, VR support in more regular emulators is much more likely.