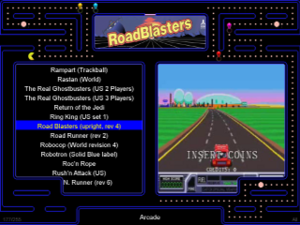 IV/Play
IV/Play (pronounced "Four Play") was designed and commissioned by John IV as an alternative to MAMEUI. It has a narrow and particular feature-set, is keyboard driven, and utilities many of the navigation and keyboard short cuts of MAMEUI. It is available as a combo x64/x86 app and is targeted towards Windows 8.1 with leveraged features like Jump List support. IV/Play is decoupled from setting MAME options directly in an effort to future proof and guard against continual core command line changes[1].

MAMEUI
Currently unmaintained, MAMEUI64 was the current name of MAME32, the original MAME GUI for Windows. As it dates back to 1997, it had additional bugs compared to mainline MAME, lacked several features of modern MAME or made it difficult to use them via GUI, and did not scale properly to high resolutions. The MAME developers did not recommend using any derivative of MAME32 for these reasons, instead suggesting mainline MAME with an external frontend if the internal user interface is not sufficient.

MameFave
A Windows-only frontend launched in March 2022[2]. Creator intends for this to be a simple way to manage hundreds of ROMs.

MedGui Reborn
At this moment - one and only with active developing. New versions appears shortly after the release of a new version of the emulator, and new commits on GitHub happens every month. The only serious drawback is the fairly awkward interface. Reincarnation of the ancient MedGui.

Mednaffe
It has a much better interface than Reborn, but apparently stopped in development. Again.

MedGui
Original one is history now, but it was revived as MedGui Reborn.