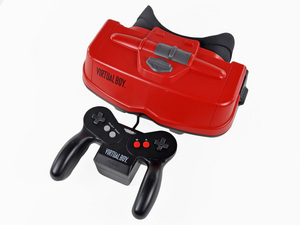 The Virtual Boy is a supposedly-handheld console released by Nintendo and created by Game Boy creator Gunpei Yokoi in 1995. It was the first games console to utilise 3D effects, however is notable for only displaying graphics in red and black, as well as requiring users to attach the console to their head, usually while rested on the included tripod. The product was pulled shortly after release due to the majority of users getting headaches from using it. Notably, it was rushed to market and was never meant to be released in its current form.

VBjin has a fork that supports the Oculus Rift.

The Mednafen core lets you change the Virtual Boy's color output to any hex color. For example, changing it to white shows all the games in greyscale instead of red. It really helps. 3D is enabled by default, but you can turn it off.