For when original low-res sprites, or ugly muddy pixellated textures don't cut it anymore, there are some emulators which allow for texture replacement - so that you can play your old games with shiny HD/4K textures to go with HD rendering. It's nice to play more of the retro games in the style of Super Mario All-Stars, the Ducktales remaster, or the N64 Zelda remakes.

Only problem: it's not as widely supported among emulators. This may be slowly changing, though. You'll need to get (or make) a texture pack in addition to the ROM. Goes without saying the game logic won't be altered. Also, this doesn't actually change the data inside the ROM proper, making this enhancement emulator-specific.

Currently, 2D sprite replacements are not as popular, so much of what's available among replacement packs is quite bland in the same fashion as Final Fantasy 6's iOS "remake" or RPG Maker stuff, but they're meant to be proof-of-concept, no more. 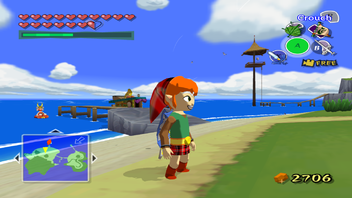