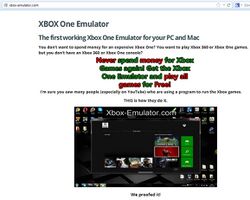 If the supposed emulator sounds too good to be true, avoid it like the plague. Remember to observe common sense and refrain from clicking on random download links.

As with most sought-after things on the web, emulation has also been the subject of scams and confidence tricks that pretend to offer either an emulator that doesn't exist, especially for consoles that have just been released and as such aren't documented and/or emulated yet, or a particular port of a popular video game such as Grand Theft Auto.

These scams all typically operate on the same modus operandi—present themselves as a working emulator, typically with faked screenshots or video footage from a popular video game, (preferably a platform exclusive) running at full speed on a PC or a mobile platform, without glitches or other anomalies. The websites used to host the scam are also made to look and feel legitimate, with some such as PCSX4 going so far as to opening a GitHub repository to give further verisimilitude, especially to the average user. But of course, the legitimacy stops at the download page, where the impressionable or desperate user would be presented with a survey or a download for potentially unwanted programs or cryptocurrency miners. It's either that the "emulator" does "exist" but is merely an empty graphical shell written in Visual Basic .NET or C# coded to give out a fake error message, or the download does not exist at all; the survey just led the unwitting user into a wild goose chase with some malware sprinkled along the way.

As mentioned above, scammers would claim to be the first to successfully emulate a particular platform, even though there hasn't been much work done as far as reverse-engineering the original hardware goes; exceptions exist such as with the Game Boy Advance having its first emulator[1] released a year before the actual hardware made it to store shelves, though that was due to a massive developer kit leak. And even then, it takes years to improve if not perfect an emulator's ability to run commercial games, especially for platforms with complex architectures such as the PlayStation 3.

Said surveys are, in essence, a trojan horse, as internet fraudsters and charlatans prey on less-savvy users who may not understand the inner workings of an emulator (or video game hardware in general), and thus profit from their gullibility whenever said users are made to fill out useless surveys. Scammers operate on a commission basis, where they are paid for each successful survey filled up or adware downloaded. Not to mention that less-than-scrupulous ad networks can and will profit from a person's private information for them to sell to the highest bidder. While it is easy for the likes of Nintendo to file a cease-and-desist order and have those sites taken down for trademark infringement, this is, ironically enough, hampered by previous legal precedent which has made legitimate emulation legal, thereby insulating scammers from liability, and the fact that most if not all scammers operate offshore, sidestepping any DMCA ruling against them.

Variations of the scam include, but are not limited to:

Of course, most people who visit this site do observe common sense and can spot a fake emulator from a mile away, but for those who don't, is what the site promises too good to be true? Do the supposed "authors" promise something ambitious even though no one else from reputable sources has vouched for it? A legitimate emulator that made a breakthrough such as NESticle or UltraHLE would've sent shock waves throughout the emulation scene and even make its way to mainstream periodicals such as Time Magazine,[2] while the biggest coverage a fake emulator would get are advisories from antivirus firms advising gamers to steer clear of them,[3] or worse, government agencies such as the Federal Trade Commission stepping in and informing (United States) citizens against such scams.[4]

TL;DR: If it's too good to be true, AVOID IT. ANY YOUTUBE VIDEOS CLAIMING TO OFFER THEM ARE SCAMS!