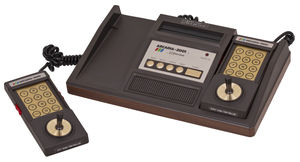 WinArcadia started in 2006.[3] It is the Windows backport of AmiArcadia, which is the enhanced official Amiga port of Emulator2001[4]. It was written by James Jacobs and Gavin Turner, but the original author (Turner) is no more credited[5].

WinArcadia and MESS are multi-emulators, which means that the Arcadia 2001 wasn't their major goal, but simply just a system upon a hundred other system these emulators are capable of emulating.