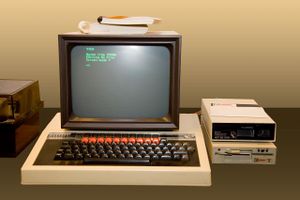 The BBC Micro (or BBC Microcomputer System) was a series of microcomputers created by Acorn Electronics for the BBC's computer literacy project. They were designed to be rugged, stable, and easy to use. Nine models were produced with the BBC brand, the phrase "BBC Micro" is usually used to refer to the first six (Model A, B, B+64, B+128, Master 128, and Master Compact), the latter three being refered to under the name Acorn Archimedes. The system was primarily used in schools across the United Kingdom, but also found success in the home computer markets in the UK, the US, and West Germany.

While the BBC Micro had fewer games than its contemporary systems like the ZX Spectrum, Amstrad CPC or Commodore 64, it was a powerful machine and several notable titles were created for it, including ELITE and Starship Command.